Request a quote from Britt 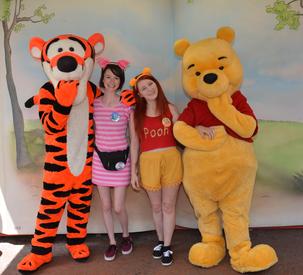 My heart and soul lie at Walt Disney World Resort! Over that time, my love has spread to the other Disney Park properties. Over the last three years, I have been working hard to become an amateur Disney Park historian. If I’m not talking about Disney, I’m thinking about it or studying the Parks. (Additionally, I serve as host to the podcast WDW Top 10, which can be found on multiple platforms such as iTunes and Spotify.) When they originally named the resort, it was simply called ‘Disney World’. Roy added the ‘Walt’ to its name as a way to permanently memorialize Walter Elias Disney and the love and magic he brought to the lives of everyone around him. In life, I always strive to be the Walt for those around me by continuing to spread that Disney magic.

Not only do I specialize in Disney Park history and little-known Disney facts, I also consider myself to be an expert at travelling as a military family. I spent time travelling to the parks as both an active duty military member and now a Navy spouse. I have experienced the stress firsthand of planning around deployments and the tight DoD budget. I am chock-full of money-saving tips for both military and civilian families. I also have great experience in planning trips with people who have anxiety and other issues that make planning vacations a daunting task.

The parks have brought so much into my life, like friends from around the world (both Earth and the Showcase) and experiences many can only dream of. Sadly, the Navy moved my family from being a Walt Disney World neighbor to be the neighbor of a giant Space Needle, but the opportunity pushed me to become a Disney Travel Planner. I want to plan those trips for my clients that I am dying to go on. Even though I have a medical degree, I would rather spread fairy dust. Among my friends and family, I am renown for having intricate and heavily throughout park itineraries. Shoot me an email if you’d like to take advantage of my expert planning services or if you just want to learn how to add that Walt E. Disney spirit to your trips around the world, Lands, and THE World! (Walt Disney World, that is!) Whether you want to take a trip to Aulani, Cruise on the Dream, dance in Disneyland, or zipline above a Costa Rican rainforest, I can make it happen!

Favorite Thing to Do at the Parks: EAT ALL OF THE FOOD!

Favorite Moment: Watching Happily Ever After with my best friend and crying hysterically into my mouse ears